Matt Makai, software developer with an affinity for Python and Swift, currently with Twilio.

Author of Full Stack Python and other Python books and videos.

My 2014 Software Development Year in Review

2014 was a solid year for improving my software development abilities. This year was different from past years because I moved completely out of software consulting and into coding open source projects.

This post will briefly cover my highlights from 2014 and go into the insights I gained from my work throughout the year. I'll cover plans for 2015 in a future blog post.

The projects and events stand out the most to me from throughout this past year were:

Throughout the year I tested a hypothesis I came up with in 2013 regarding content creation, speaking and coding. The hypothesis was that by focusing my efforts on interrelated activities ("synergy" for you MBA folks), I would get better results and feel less scattershot in my work output.

I told the Twilio Developer Evangelism team about this approach and Rob Spectre dubbed it the "Makai Triumvirate". Below is a picture representing what the approach looks like. 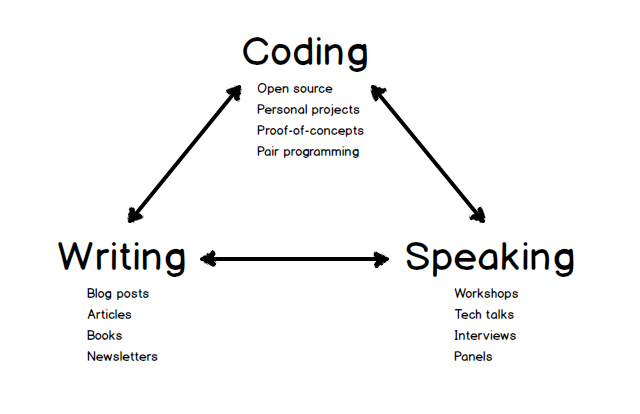 When activities are related I can produce much greater output in coding, writing and talks than if I worked on several varying topics in parallel.

A good example of this triumvirate approach is the work I did this year with Ansible.

From the list above it's evident that much of the work I did revolved around coding followed by writing and speaking after gaining experience with the library.

After that work in the first six months of the year I relaxed my focus on Ansible. I still use the project all the time for deployments but I moved on to other topics for coding, speaking and writing.

The triumvirate approach sounds like common sense. However, when you're asked by a conference organizer to come up with a technical talk, it's easy to get excited by a new but unrelated topic and try to create a talk around that new thing. This focused approach allows me to say "what are the 3 big things I will work on this year?" and cut out anything else that is unrelated.

Open source was a much bigger part of my professional life in 2014 than in any previous year.

The above image shows my my daily open source GitHub contributions through December 25 of 2014. I came up with the idea to push an open source commit as many days as possible throughout the year. Currently I'm at 282 days in a row with my last miss on March 18 (I was up in NYC with our Twilio crew so I missed that day by accident).

Overall I should end up having missed 3 days out of 365 this year. I'm happy with that streak. It's possible I'll commit less in 2015 but I haven't set a hard target on my goals after Dec 31 just yet.

I didn't write a lot on this site since I had a lot going on with Full Stack Python and external websites. Here's a quick list of my blog posts from throughout 2014.

Via the Twilio blog I wrote:

Lauren Orsini did the writing for the following three articles but we hacked on code together to produce these articles for ReadWrite:

I'm happy with how 2014 turned out from a software development standpoint. Much of my time is spent writing and speaking as well as coding which is fine by me since I no longer have to worry about the constant billable hour pressures of being a consultant.

2015 is already shaping up as a killer year. I'll have a separate blog post later on my plans for the new year.